A Boost For Nollywood With ‘The Wedding Party’ Success 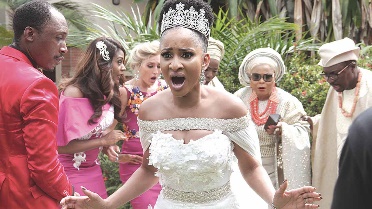 Nollywood film “The Wedding Party” has shown Nigerian cinema at the top of its game, with its success at the box office taking it to new audiences across Africa and the world.

The country may well be in recession but Nollywood, which churns out some 2,000 films a year and is the world’s second-biggest film industry outside India, has never been healthier. “The Wedding Party” is a madcap, glamorous comedy telling the story of the marriage of Dunny and Dozie, despite the misgivings of their families’ rivalries.
One family is Igbo and the other Yoruba — two of the main ethnic groups in Nigeria.

The film’s director, Kemi Adetiba, admitted that she hadn’t expected it to be so successful.
In the two months since its release, the film, which is still showing in cinemas, has already generated 400 million naira ($1.3 million, 1.2 million euros), shattering the west African nation’s previous record.

Until then, the record was the 178.5 million naira made by “A Trip to Jamaica”, which also came out last year, showing that homegrown films can be more popular than Hollywood blockbusters.