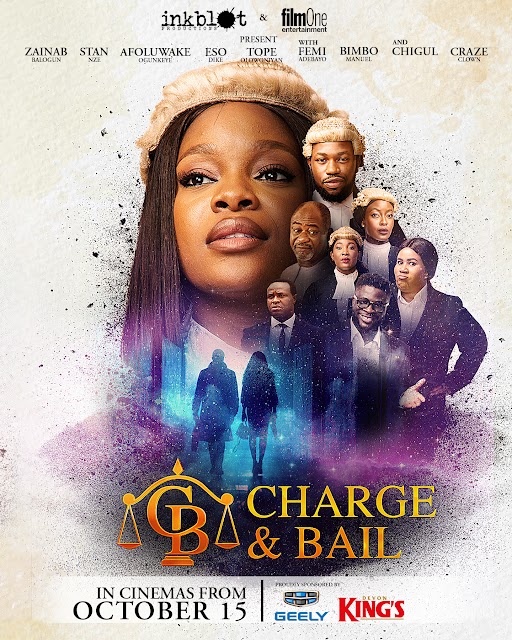 See the Official Trailer for Charge And Bail

Fresh off the heels of the blockbuster Quam’s Money and family favorite DOD: Day of Destiny, Inkblot is set to release its highly anticipated first film of 2021 the coming-of-age comedy drama Charge and Bail

With fourteen films released in the last six years Inkblot Productions is deeply woven into the fabric of Nollywood. Releasing such cultural touchstones as The Wedding Party Series, The Arbitration, The Set Up and the New Money Series, Inkblot continues to be at the cutting edge of Nigerian cinema.

Inkblot is focused on bringing great Nigerian stories to our audiences and are working with amazing visionary storytellers to do so. Inkblot has tapped Uyoyou Adia (writer of Nneka the Pretty Serpent and Ghost and the The Tout Too) to direct its latest film Charge and Bail which stars Zainab Balogun as Boma, a high-flying lawyer from the upper class who finds herself posted to a Charge and Bail law firm run by Stan Nze’s Dotun and his brother Wole played by Femi Adebayo during her NYSC Service Year.  A culture clash ensues between the haves and the have nots as Boma tries to navigate the new world.

Speaking on the upcoming release of Charge and Bail, the writer/producer and Inkblot Co-founder Chinaza Onuzo had this to say “Zulu, Damola and I were delighted to work with Uyoyou Adia on Charge and Bail. Uyoyou is an talented director with strong vision and collaborative spirit. We can’t wait to show everyone the magic she made working with an amazing set of collaborators.”

Director of Charge And Bail, Uyoyou Adia speaks on her collaboration with Inkblot and why she chose to make it her first cinema film. “The story of Charge and Bail is very dear to my heart. It’s an exciting story about a young woman in Nigeria seeking to find herself in a place where she least expects. It’s a story that resonated deeply with me and will resonate with the Nigerian audience.”

Charge and Bail marks Inkblot’s seventh collaboration with Film One Entertainment, the leading distribution company in Nigeria. Together their collaborations have generated over one billion naira in box office at the Nigerian cinema.

Charge And Bail is set for an October 15th, 2021, release, and is sure to delight audiences in typical Inkblot fashion.

See the trailer for Charge And Bail HERE