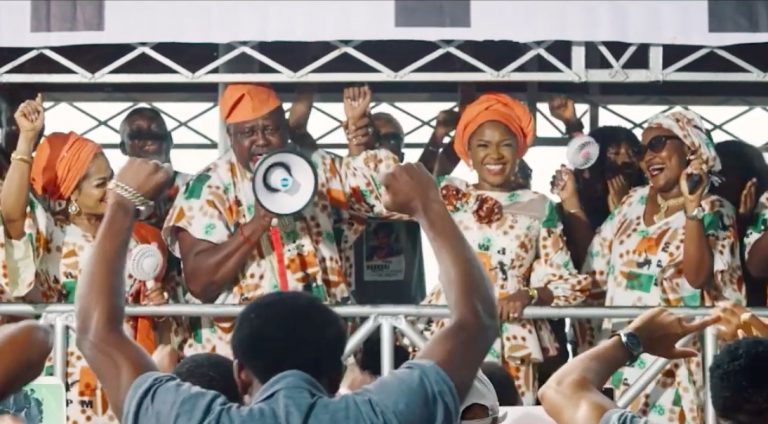 Following the Success of the 2018 smash hit “Moms at War”, Inkblot Productions and Dioni Visions are back with “Love is War.” Staring Omoni Oboli and RMD, Love is War is about a married couple who run against each other for Governor in the same state!

Written by Chinaza Onuzo and Directed by Omoni Oboli, Love is War is a comedy drama about love, ambition, family and following your dreams. This movie is jam packed as you would expect from such a strong creative team.

Zulumoke Oyibo; Founder and COO at Inkblot had this to say – “We had a pretty clear direction of where we wanted to head with the second collaboration with Dioni Visions. Omoni is very dedicated and resourceful, so our work with her team was seamless. They are one of our super collaborators. “

Omoni Oboli echoed the sentiment; “Working with Inkblot is always a pleasure. They understand my desire to tell stories about Women’s issues and families.  I was excited to collaborate with them again on Love is War. The issues at play in this movie are very dear to my heart and I can’t wait for the audience to experience my vision.”

Love is War is set to be another blockbuster from two of Nigerian cinemas biggest production companies, when it is released in cinemas across Nigeria on September 27 2019.

Inkblot Productions is one of the leading production companies in Nigeria focused on creating high quality, commercially viable, films and television shows for Nigerian and international audiences. Since the release of its first film The Department, in 2015, Inkblot has released 10 films including the top grossing Wedding Party Series, and other commercially and crucially acclaimed films such as Moms at War, My Wife and I, New Money, Out of Luck and The Arbitration. The Set Up was Inkblot’s 10th film and the upcoming Love is War is the latest from the prolific production house.

Dioni Vision is a multifaceted company with entertainment at its core, founded by Nnamdi and Omoni Oboli. The company is involved in the production of movies, documentaries, entertainment consulting and the rentals of production equipment. The first movie produced by the company, The Rivals, was a coproduction with Blessing Egbe’s B’Concept Networks in 2007. The next movie produced in 2014 was Omoni’s directorial debut Being Mrs Elliott. Omoni went on to direct six more critically and commercially successful movies: The First Lady, Wives On Strike, Okafor’s Law, Wives on Strike: THE REVOLUTION, Moms at War and Wings of the Dove. In 2017, Dioni Vision produced its first TV series Wives On Strike: The Series in conjunction with Trace TV. The upcoming Love is War is Dioni’s 9th film and Omoni’s eighth as a director.